Snow is finally falling here. Earlier, when it first began, it was falling in those big, fat flakes that look so pretty. It's the first time in recent memory that we've had a Christmas without snow, either here in the north country or in Albany. It might have even been the early 80's when we last had one. It's especially pretty here on the river. I took a couple quick pictures, but for some reason, I am unable to upload them this morning. I'll try again later. Usually by this time in the season, I'm already longing for spring; but we've had so little winter so far, that I'm not quite there yet. And it really only just officially turned into winter last week. Doesn't it seem ironic that on the first day of winter, the days begin to get longer .. the days slowly lighter? I understand hibernation perfectly. I would if I could. As it is, this upcoming period from January to around the end of April will be spent learning new skills, experimenting with old ones, and putting it all together for a new collection of handcrafted artisan jewelry to dazzle customers new and old in the 2007 season. For the moment, however, I'm cleaning up after a late summer into fall period full of home "construct, repair and replace". And there's still a bit more to do .. but it will have to wait until our home renovation account is replenished. It always costs more than you expect it will. Anyway, I'm off to dust, vacuum, polish, mop and wipe up ... and I am SO looking forward to a clean and tidy house so that I can get to work next week. It's the burden of a Type A, perfectionist, methodical Virgo to have everything in order. A place for everything and everything in its place ... well, as close as one can get with a man and dog in residence.
Posted by The Wild Inside at 8:45 AM No comments:

A teaser, a test 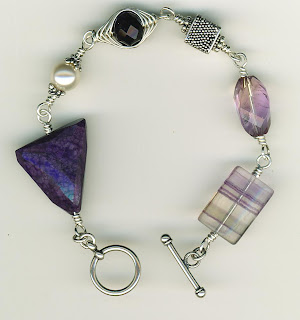 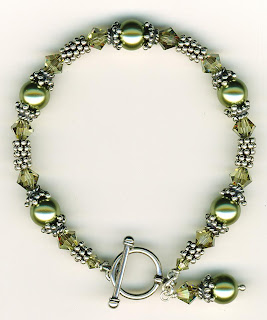 As I'm not one for reading directions, at least when things seem obvious, I just dove right into this blogging thing without any training wheels. Thought I was going to have to download some FTP software so that I could upload photographs, but Blogger makes it easy for you and does all the work. So I thought I've give it a go using the scans I make of new pieces. I have a light cube, all the appropriate lighting and a digital camera; but I haven't yet set it all up. I use the scans as a quik n dirty way to catalog each piece for reference. The piece on the top above is "Purple Phantasy" .. a wire wrapped piece with fluorite, ametrine, an intricate little square Bali bead, blue goldstone wrapped in a herringbone weave, a Swarovski pearl, and that large triangular stone is sugilite. The scan doesn't do it justice. The piece below it is called "Sparkle" .. just a simple beaded piece, but I sell 'em as fast as I can make 'em. Just granulated Bali spacers and bead caps and Swarovski pearls and crystals; but it does sparkle! Besides the green I also made it in Tahitian, brown and creme rose shades. Sold some to a local jewelry store and they keep coming back for more. No complaints! But I am going to have to get more of those Bali bead caps soon!

All the new stuff, the chain maille, the wire worked goodies, the Precious Metal Clay (PMC), etc., is going to have to wait until after the New Year. Though I've got a million ideas to work into pieces, it's just been a bit crazy lately. I did manage to dig up a bunch of plants on a three-acre plot where we let our dog run loose for daily romps .. plants with perfectly sized and shaped leaves for PMC imprinting .. and popped them, dirt n all, into an aluminum lasagne pan and set them in front of a window in my studio. Here it is December 21 (Happy Winter Solstice!) - and even though we haven't yet had any significant snow fall, that can't last long (this is the "almost Great White North" after all). I was afraid the plants I'd staked out would be lost beneath a white blanket with no chance for organic imprinting until the spring. And they like it. They're actually thriving! I think if I leave them alone long enough, they'll continue to grow; and I'll have a continuing supply of these artsy little plants. In fact, while the weather remains a balmy 40 degrees, I may just go buy a couple more lasagna pans and dig up a few of the other interesting plants I've noticed on recent romps .. well, until I run out of room for lasagna pans.
Posted by The Wild Inside at 2:03 PM No comments:

OK, so I don't have a web site; but I own the domain name for one. I just haven't had the time (or money) to put someone to work on one. And as a Type A personality, only something "Virgo Perfect" will do. I created a website once, and was webmaster for a couple of years; but it was a time consuming adventure - time I'd rather spend making jewelry .. which is why we're here! It's definitely time to work something up, so my goal is to get a website up within the next 18 months. Seems like a long time, I know, but I hate to fail .. so I'm setting the goal, but giving myself enough time to bring it to fruition. Only fair .. my goal, my terms. In the interim, I thought this nifty space would work until that time when you can pop www.thewildinside.com into your web browser and actually get something other than Network Solution's "under construction" notification. So, until that time when I can invite you into my personal "domain", please check back here for pics of some of the new stuff I've been working on. Now, if I can just figure out how to upload pics!
Posted by The Wild Inside at 12:59 PM No comments: