I've been out of commission for several weeks due to a repetitive strain injury in my right hand/wrist. It just amazes me whenever I do something like this to discover just how much we use a particular muscle or body part! The problem was caused by a little too much laptop data entry .. it seems I overworked the joint in my right thumb, which created a little swelling in my wrist, just below the thumb pad. I feel like I've gotten a rather painful anatomy lesson. It's difficult enough turning the ignition key in my car, or shifting, or washing dishes, or opening a jar, or dressing, or putting on a jacket, or brushing or drying my hair .. making jewelry was out of the question.

However, after cleaning up portions of my studio - which could be done without hurting myself and was sorely needed - it was tough not to develop a whole bunch of ideas while putting away wire and pearls and stones and findings and stuff. It was an idea from an artisan friend though that finally had me thinking about what I might pull together, despite my (hopefully) temporary incapacity.

The idea was a donation .. she and I and several other friends are part of an artisan group covering three local counties (check out the link to the Adirondack Artisans Guild over on the right). My friend's daughter is coordinating a fund raiser at the school where she works in California and suggested that our group might open ourselves up to a whole new market if we were to donate as a group. I'd totally forgotten about it until the last minute, so didn't have a whole lot of time .. plus I couldn't pull together the sort of wrist wrenching wire work I would have liked to have created for what I saw as an opportunity to advertise along with my tax deductible contribution. I always think of California as ahead of the curve in style and accessories .. I wanted something a bit different and eye-catching.

So .. I pulled out one of my funky fine silver toggle clasps .. this one is about 8 grams of pure silver and is textured on both sides, as you can see from the photos here (one side is a sort of checkerboard, the other is a wavy pattern). I might have normally fused some smaller fine silver rings to both ends and attached something with stones and silver beads and more fine silver connectors. But I thought that stringing a bracelet would be less stress on my wrist, which turned out to be the case. The clasp is about an inch across though .. a single strand, unless relatively large beads were used, would be overwhelmed by the large clasp.

I spent an entire day working out the design, color scheme and additional beads to be used before I finally began to assemble it. It was seasonably warm and sunny last week when I put it all together .. mid 40's, which is seasonable for this time of year in northern New York! I had initially chosen some peacock blue pearls .. they looked fabulous with the silver accents, but it was so dark. So I went rummaging through my pearl drawers and found these pretty, bright, and very Spring-like Celadon-colored fresh water pearls. And as it happened, I had some similarly colored 6/0 Czech glass beads to fill in the strands. I originally tried to use them to make the bead loops attaching the ring portion of the clasp to the strand, but they turned out to be just a tad too big. It was difficult to get the bar part of the toggle to fit through the hole when the 6/0 beads were taking up so much space inside. Fortunately, I found some smaller seed beads that fit the bill .. both in size and color. The rest of the strand is comprised of little three-sided Thai silver beads, some tiny little fine silver nuggets I made, and some very cool "gear" shaped beads made of silver-coated ceramic.

I have to tell you, it's been a LONG time since I've used crimp beads in a piece. I spent a good half hour looking for both crimp beads and the special tool one needs to attach them to a strand. All of my strung pieces use either beads tips or French wire to attach a beaded strand to a clasp .. but I couldn't figure out a way to attractively do it. The problem with crimp beads is that if you crimp a little too enthusiastically, you'll destroy and weaken the integrity of the wire inside the crimp bead; if you don't crimp firmly enough, the wire will ultimately work its way out of the crimp bead and all your beads will slide off and disappear.
I was delighted both by my ability to still be able to crimp properly AND with the design and look of the bracelet when it was done! It's very bright and Springy .. I called it Spring Fling. Hey, I was on the clock .. it was the first thing that popped into my head. It'll do : )
The event is scheduled for May 1 and is called Moroccan Nights: An Evening in Casablanca .. and doesn't THAT just conjure up a whole bunch of wonderful images in your mind .. dark, smoky jazz clubs, slinky gowns and swept up do's, mysterious strangers ... Bogey?!?! The paperwork suggested that ALL items will be put online for bidding unless the donor requests otherwise .. and why would anyone request otherwise?? The school is www.vistamarschool.org .. and I'm assuming there'll be a link somewhere on their site to the silent auction items once they have them all in their possession. I'll certainly keep you posted! : )
UPDATE: The link for the online auction portion of this event is up for viewing. Though bidding isn't possible until April 13, you can still scroll through what they've put up so far. I'm told there's a whole lot more to come. The site may be found here. If the link doesn't work, just copy and paste this: http://www.biddingforgood.com/auction/AuctionHome.action?vhost=vistamarschool 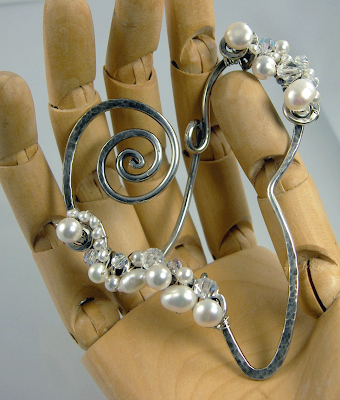 This large and fabulous pin design has taken on a life of its own. It began with a project by Sherilyn Miller from one of the many jewelry magazines to which I subscribe. I made the pin exactly as the project described, and even sold a few - which hadn't been my intention. I usually view projects like this as a chance to stretch my skills .. you make the project and hope that what you've learned spurs you on to other things. Even better, this one project has been the springboard for more variations than any other design project I've ever tried. From this simple pin design I came up with a beautiful bracelet idea .. called Tranquility (though I called the one I gave my friend for her April birthday April Showers). I did so incredibly well with those bracelets - which varied slightly in size and stones, though remained always a soft shade of blue - that I'm working on trying another color scheme for it this year. It was the pin's most recent transformation that made me think that pearls and crystals might be the way to go.
I might have ultimately come up with the pearl idea on my own, but it was a potential customer who saw at a small show in Watertown a similar pin I made for a friend of mine (who was wearing it at the time). It was the same size as this pin (I have made a smaller, more delicate version, but neglected to photograph it before someone purchased it) but was covered in three different stones representing the birthstones for my friend, her husband and their son. I explained to her what the stones on my friend's pin represented and she asked if I could do one in jewel tones. Not a problem, I told her. But after subsequent back and forth emails with multiple scans of various stones and crystals, she asked if pearls and crystals would work. Even better, I thought. Clean, simple, romantic .. with just a little sparkle.

I was pleased with the finished pin .. about five or six of the crystals are small, 4mm round, clear crystals with an AB (aurora borealis) coating on them. It adds just a little flash of color without going over board (though no matter how many shots I took, I couldn't get that little flash of color to show in a photo). I've got several drawers full of white and cream pearls, so I was able to create a pleasing mix of different sizes and shapes.
For the moment though .. it's 2009 year-end and taxes that are scrambling the synapses in my cranium .. so the creative side of my brain is taking a break while the analytical side takes over. And that, my friends, is where the trouble usually begins ...
Stay tuned!