I just love this pin! It's a big bold one though .. about three inches high and around two and a half inches across at its widest. But, boy, does it look great on a big 'ole bulky sweater or holding a beautiful knit scarf in place!

I made two just because I was curious how the difference in the wire gauge I used might affect the finished pin. The first one (on the left) was made using 12 gauge wire for the base and 14 gauge for the curliques on the sides .. and it's a substantial piece of jewelry! I've made pins that could poke through fine knits without leaving a hole .. however, the weight of this alone would be problematic for anything less than a bulky sweater, shawl or scarf. 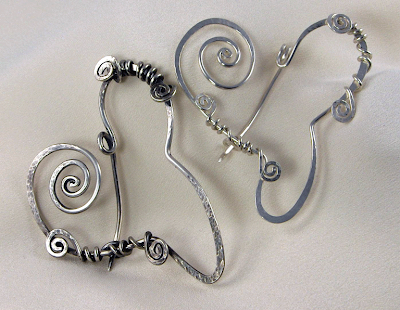 The second pin (on the right) was made using 14 gauge as the base and 16 gauge for the embellishments (you understand that wire gets thinner the higher the gauge, right?) Were you to hold one in each hand, you would notice the difference in weight. A design plus in using the 12 gauge wire is there's more wire to pound in those areas where I forged (flattened) and added texture. When I tried that with the 14 gauge wire, it really flattens it (whereas the 12 gauge still has a bit of thickness to it even after some pounding). And you can't really see the indentations on the lighter pin in this picture .. they're just barely visible on the photo on the top (and that's partly because the heavier pin is patinated and the lighter pin is not). 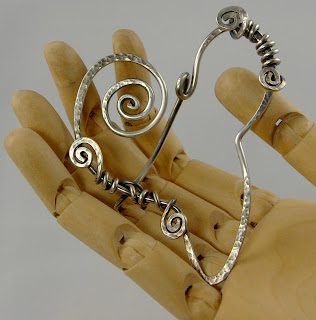 I was playing around with this really cool wooden hand I bought years ago and ended up with one of the best pics of the pin I think I've gotten yet. I find that these kinds of props usually provide more distraction than any positive effect, but it was the first - of all the many photos I took of the thing - that showed more of the detail, so I couldn't resist including it.

I'm working on a design that's about 3/4 size using 16 gauge wire as the base .. and instead of strictly wire embellishments along the sides, I've been playing with winding some small pearls with fine wire in and around the heavier wire embellishments. And THAT idea lit the light bulb over my head for a new cuff bracelet!!

I think the warmth and the birds, the peepers beginning to chirp at night and the promise of a real spring finally arriving has gotten some of the creative juices flowing again. My, but it's been a while ...
Posted by The Wild Inside at 1:37 PM No comments: