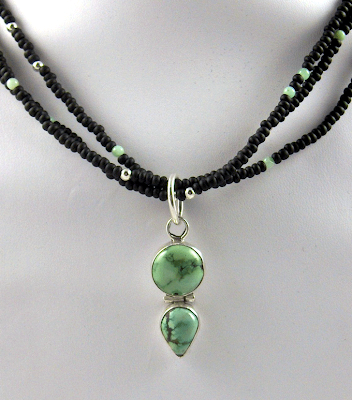 I've been doing a whole lot less stringing over the last year or so, mostly because I've been having fun with wire and metal clay, among other things. But I've had to put my beading cap back on and come up with some designs that put less strain on my wrist as it seems, after almost five months, that I'm still dealing with some pain and discomfort. For a while I couldn't even make a simple wrapped loop on an earring. That isn't the case any longer, but working with anything thicker than 18 gauge (dead soft) wire has me reaching for the Ibuprofen before bedtime. I feel a little improvement now and again, when I realize I can do something I couldn't do even a couple weeks ago without pain, but it's been very slow. I have every confidence that I'll get to the other side of this, but while I'm waiting I have to think about the few shows I have coming up. So .. I rummaged through my collection of materials this week and found a whole box of Czech glass seed beads!

There are any number of secreted, forgotten surprises down in my studio .. boxes, bags and baskets full of stuff stashed away for later use. You know how it is .. if it isn't out where you can see it, you tend to forget it's there. Most of the seed beads I have are 6/0 size .. a bit larger than what I wanted for a multi-strand necklace that began materializing in my head. I needed something that would allow three or four strands to fit nicely into the sterling Bali cones I also found while rummaging. These matte black beads were perfect for the job! (There are some other colors I found to play around with as well .. this one just worked with the color scheme I needed at the moment).

The little pale green beads are chrysophrase, a real pretty stone that often looks like it's illuminated from within. They're interspersed with 4mm sterling silver round beads.

The cones that capture the strands at the clasp are absolutely gorgeous examples of granulation. These were hand made (not cast) by artisans in Indonesia .. each one of those little dots is applied one at a time. You should be able to click on any of this photos and see the piece close up.

The toggle clasp is also an Indonesian hand made component. You can usually tell the difference between truly hand made Bali components and those that are more cheaply cast by the way they look upon closer examination. "Bali Style" components which are cast look sort of like they were partially melted in the sun. Because the silver is poured into a mold instead of created from scratch, the individual design features lack the sharp detail of individually placed design segments - they run into each other instead.

The pendant is turquoise and is hinged in the center .. it's also removable, so you can wear the strands without the pendant, if you choose. The first thing I thought of when I put all the colors together was a panther .. you know, black as night .. with green eyes? But I couldn't name it "Black Panther" without thinking about the 60's and the negative connotations .. so I called it "Jungle Cat" instead.

It's currently in a beautiful Arts & Crafts oak display case at Mare's Wares Pottery on Route 37 in Morristown .. the site of an upcoming show on July 1st. Look for more information about the show at either www.artisansoftherivervalley.com or on Facebook at "Mare's Wares Arts Fest". If you're in the area, stop over .. it's going to be an incredible day!

Posted by The Wild Inside at 3:54 PM No comments: