Moose on the Loose

I was thinking about cleaning up my hard drive of extraneous files .. and the first place I usually begin is in "my pictures". I have a tendency to empty my camera, clean up a few pics, maybe upload one or two, and then just leave the rest in that day's file. They tend to add up after awhile .. like scroll forEVER when I open "my pictures", with files from every month - full of pics I may or may not have used. Soooo many photos to go through .. it's daunting. I should keep up with it .. but I should keep up with my business bookkeeping, too .. and that ain't gonna happen either. I try for a month or two, then fall back on old habits. Human nature. It is what it is.

Anyway .. I began at the end (the most recent files first) and had almost forgotten about a quick series I took while on my way back home from a show I did in Saratoga Springs around the end of November. I came through the mountains on the way back because it had been awhile since I'd been through there, and I was hoping for an opportunity to stop and browse in all the cool little shops I never had a chance to peruse when my husband and I occasionally made that trip from Albany to visit his dad in Massena. From Saratoga it should've been about a four hour trip straight through to Ogdensburg .. with all my little stops, it was more like seven. Wish I could have stopped at The Wild Center in Tupper Lake, but that would have been pushin' it. For another time, I think ... like late spring perhaps!

I was only about a mile or so from the old Olympic ski jumps near Lake Placid when I came around a corner and saw cars lined up on both sides of the road. As I had no idea what was going on .. and because the amount of road left to drive on was severely curtailed on both sides due to the parked cars ... I slowed down. People were out of their vehicles, or getting out of them .. and they all seemed to be looking at or heading over to the left side of the road. All it took was a turn of my head to see what they were all staring at or photographing. 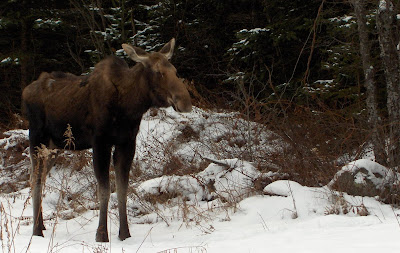 I could barely believe it. There was a moose .. just standing there. It was difficult to tell if it was OK with all the people standing around, or scared stiff and unable to move. It turned it's head now and again, but pretty much stayed put while more and more people - including me - collected on the side of the road. It looked like a young 'un .. no horns evident; and as its hind quarters were facing the woods, I could see no "equipment" beneath, so I have no idea if this was a bull or cow. There were several vehicles on a side road watching, too .. I walked over and took a couple shots from there, too (which would be over to the right of this photograph) ... 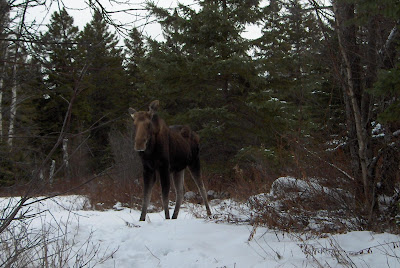 It wasn't until I was on my way .. just past the ski jumps .. when I saw the State Police heading in the direction of all the commotion. Hope everyone got all the photos they wanted .. and the moose was able to lumber off with no ill effect.

I was so happy to have come upon the scene when I did .. it was all I could do to keep from walking up to it and giving it a little scratch behind the ears. Instead I have this little photo memory of it .. and that's OK, too.
Posted by The Wild Inside at 1:44 PM No comments: