I used to do "Progeny" bracelets all the time about six or seven years ago .. the kind with the little square sterling letters that spell out the names of the recipient's children or grandchildren. I still have some of those little letters, though I haven't used them in quite a while .. and they certainly would not have worked for this commission, which needed to represent 17 grandchildren! I doubt the recipient has a wrist sturdy (or long) enough to endure the weight of 17 little sterling names! But then, there are always birthstones ..

What I like about this style of bracelet .. a one-of-a-kind special order using stones instead of names .. is that it's so very much more personal and private. Someone could look at this piece and have no idea that each and every stone represents a special little person. There are no doubt some women who would prefer the conversation-starting style of a bracelet with several names on it .. other women know what those names are and are bound to ask. And some women would love nothing more than to relate the glowing and talented natures of each and every name on her bracelet. This design allows for more subtlety .. someone might see it and comment on it; the recipient is then able to either simply express thanks for the comment (a positive comment, I hope) or go on to explain what the stones represent. I like the mystery of it. Some women like to keep a few special things to themselves .. or not. And sometimes it just depends on the moment.

I will admit that 17 birthstones seemed a bit daunting at first; but I think I came up with a design that is not only balanced, but doesn't even seem like it contains 17 stones at first glance. I have a "Modern" list of birthstones posted in my studio, and it's this list that I use when anyone wants to talk about making a piece like this. I made myself nuts hunting up a list I could use .. there are so many different versions. I finally just found one that seemed to contain most of the recognized standards. This particular list contains alternative stones for several months, which turned out to be useful for this design, as I was able to use one of each for months that represented more than one child. The 17 stones used for this piece are as follows:

The only segments of the bracelet that use sterling silver are the lobster clasp, the wire used to wrap the small dangling briolettes, and the half hard wire I used to connect loose stones to each other or other segments in the bracelet. Everything else .. the CHERISH and heart charms, the large patterned rings, the smaller jump rings, and the ball-end headpins .. are all hand made and work hardened by me from fine silver. I would have liked to have made the entire thing from fine silver, but I couldn't work harden the wire I used to connect segments without mangling it. Even drawing the wire through a draw plate didn't harden it to my satisfaction (not enough to hold up under heavy wear, which these kinds of bracelets tend to get) .. so I compromised a little.

The photo above shows the little heart charm and a fine silver extension chain to which is attached a small fresh water pearl disk, a peach moonstone, and a faceted lemon citrine briolette.

Once I started thinking about it, I was able to come up with a design idea relatively quickly - though it ended up taking me five .. almost six .. months to complete (it was intended either for the recipient's birthday on November 30 - missed that one due to my anal retentive, gotta get it right, attitude - or Christmas). I would lay out some stones, but would keep coming up with new configurations. Then I'd be unhappy with the stone selection I had for the few more precious versions that were included: I had sapphires, emeralds and blue topaz, but they were all very small and wouldn't have stood out as a part of the piece the way I had wanted them to. Fortunately, I found a fabulous new supplier from whom I could purchase precious stones in small quantities (most stones and pearls come on 16" temporarily strung strands .. more spectacularly cut stones or specimens come on 8" strands or are sold by weight). This made all the difference! A full 16" strand of emeralds, sapphires or blue topaz like those used in this piece would have been hundreds of dollars. It took me a while to find all the replacement stones I wanted .. but it was worth the wait.

The pink stone on the left is actually an opal .. not the usual Australian type but rather a pink Peruvian variety (Peru has blue opals, too, but they're much more rare). I did finally find some traditional Australian opals .. but even though the strands were a bit costly, I was so very disappointed in their quality when I received them, I couldn't possibly have used them in this piece. The pale blue stone on top is an aquamarine. Since there were so many garnets, I used the smallest ones I had. They hang on either side of a sapphire on the left and a Swiss blue topaz on the right (and isn't that a pretty stone!?!) 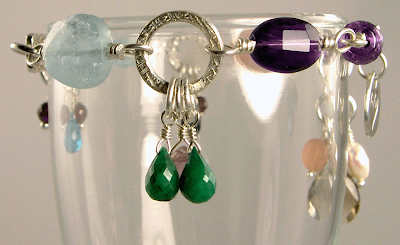 There's the second aquamarine on the left, two beautiful amethysts on the right, and two emeralds and a little pink tourmaline hiding behind them in the center. The large ring from which they dangle is made of fine silver (that's .999, or as close to pure as you can get) and is patterned on both sides. Adding the two patterned rings allowed me to add those smaller stones without taking up any length on the bracelet.

The CHERISH charm was an after thought .. I knew I wanted to add a charm like that somewhere on the piece, but I wasn't sure what I wanted it to say, where I was going to put it, or how big or what shape I wanted it to be.

It wasn't until I began to assemble the pieces that I got a better idea of what I wanted and how it would fit in. I knew what size the bracelet needed to be and had to lose a larger coin-shaped fresh water pearl in order to use the rectangular charm. I ended up putting a smaller coin pearl on the extension chain .. and was thrilled that it ended up balancing well with the little disk-shaped peach moonstone! I love it when it all works out!