A little sunshine on this dreary day ..

I don't make nearly enough pieces in gold, but when I do they're nearly always eye catching. Not that my sterling and fine silver pieces aren't eye catching as well, there's just something so sunny and bright about this metal! I call this one Southwest Summer .. it just oozes the colors of sage, adobe and dry heat - with a few fluffy white clouds and a blindingly bright orange ball in the sky.

This burst of color is one of the things I love about lampwork glass beads .. that and the infinite creativity the artisans who make them seem to harbor in their bosoms. It's difficult not to feel a sense of fun in a piece full of lampwork beads!

While I have several pieces that are solid metal, I think I will always include pieces that speak to me of a place or an emotion or a time which can be expressed with color. Some color combinations are like a song .. or a smell .. that invoke a wealth of thoughts or memories. A sort of sensory placeholder that just sort of pops up when the right combo is put in place. These memories or thoughts most often reveal themselves in the names I choose to give my pieces .. some are obvious, others not so much.

This one seems rather obvious, doesn't it? Despite the fact that the design is based on a similar silver version called Twilight .. which used pale blue/violet color- changing lampwork glass beads .. Southwest Summer seems to fit the piece well. And if I hadn't told you of the design similarities, you might never had made the connection.

OK .. I'm off to begin piecing together a commission for a grandmother's bracelet containing natural stones representing 17 grandchildren! While I've got a basic idea of the design features, I've yet to lay out the individual stones and decide what goes where just yet. And I'm thinking I'd like to make as much of it as I can out of fine rather than sterling silver, which will require a bit more care in keeping connecting pieces sturdy. Stay tuned ..
Posted by The Wild Inside at 7:35 AM 3 comments:

A Good Day Was Had! 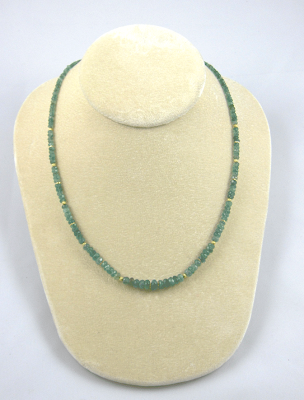 I have no idea how I missed logging and photographing one of my higher-end pieces, but I did. And thankfully, when the customer who bought it wanted it reproduced in another stone, she was willing to give it up for a few days so I could log the materials used and photograph it for my records. It must have just been one of those crazy weeks when I was multitasking beyond my abilities. It happens.

The necklace in question is called Emerald Isle and is composed of a faceted, graduated strand of emeralds separated at intervals with 18k and 22k gold beads and ending in a handcrafted 14k wire clasp. One of those simple but elegant little pieces. She bought it back on July 1 during the Mare's Wares Art Fest up here in Morristown; but she came to the Studio Tour our River Artisans put on in mid-August and asked if I could make another using the same gold beads but with a strand of aquamarine in place of the emeralds. I ordered several strands of aquamarine and found one out of those that fit the bill .. a very pretty 5mm faceted strand (the only graduated strand I could find began with a rather large 7mm center bead .. a bit too large).

The only change I made was in the clasp .. the emerald necklace originally had an 18k gold hook clasp which I replaced with the 14k gold wire one I made. I explained to the customer that I still had the 18k gold clasp; and as the aquamarine necklace was a gift for her daughter's 40th birthday, she was fine with using the 18k clasp instead of a handcrafted 14k clasp on the piece.

My only complaint about the whole thing was that neither necklace was easy to photograph .. or maybe I've just been away from my camera too long! I finally succumbed to my old routine of flat bed scanning the pieces .. though the true color of the two was still illusive, one of the things I have always liked about flat bed scanning jewelry is that there's little concern about clarity or fuzzy shots. The pieces are always pretty clear .. even if the colors aren't ; )

I have to admit, I was a little iffy about combining a pale aquamarine stone with gold .. the customer's daughter had expressed an interest in her mother's emerald necklace, which is where the idea came to purchase one for her daughter in her March birthstone. When I delivered the two necklaces on the 16th, even SHE thought she might not like the result; but in the bright light coming through the windows, it sparkled like sunlight on water. It really was a lot prettier than I would have imagined. She was equally pleased. I love it when it all works out!

Of the two photos of the aquamarine necklace shown here, the one on the display device is closer to the true, pale shade of aquamarine. Though I think the scan is a bit sharper, and allows a better look at the clasp. It's nothing special .. there's a little Bali granulation at the base of the hook .. but in 18k gold, it was about 45% of the total cost of the piece. Invest in gold, folks! 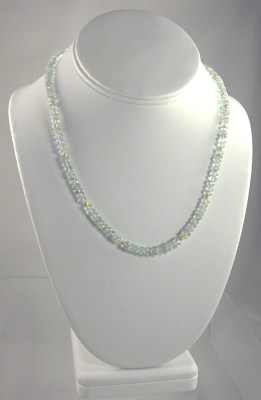 It's funny, but I've been on a sort of familia hiatus for the past couple of months .. helping out with issues revolving around family members .. and haven't been actively selling or doing any shows during this time. Then all of a sudden I sell two high-end aquamarine necklaces in one day! A nice surprise .. much needed and appreciated.

I sold the second necklace .. a longer, 21" faceted strand hand knotted on silk with a pretty little Bali toggle clasp .. to my mom's tenant! Go figure. He's a full-blooded Italian from my mom's old "Italian flats" neighborhood in Watertown and has been occasionally surprising her with lasagna, stuffed shells, and other gustatory delights on weekends when he has time to cook. It just happened that I was staying with her last weekend when he brought over enough for everyone. We got into a gab fest and after a bit the jewelry topic came up .. I had some fun pieces with me (including the emerald necklace which I had just picked up from the customer on the way down to my mom's). I think he told me he needed something for his ex .. who's birthday is October 22nd. What a guy, huh? So when I had to drive back down on the 16th, I brought the hand knotted aquamarine with me for my mom to show him that night. He called later that evening expressing amazement at my talent (I love those calls) and asking how much he needed to leave with my mom for the piece. He also expressed an interest in the solid silver necklace from a couple posts ago for a drum playing nephew named Sam. I'm still a little attached to that one .. but not so attached that I wouldn't sell it! Ah, who knows .. perhaps it was just the several bottles of beer talking .. dunno. I'm not a high pressure kind of sales person, so I'll just wait and see if the topic comes up again .. stay tuned! 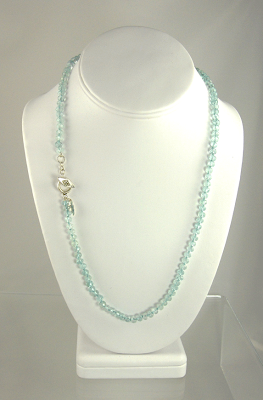 Posted by The Wild Inside at 10:29 AM No comments: